So just so I know going in...Endless means there's no end of game, right?

Initially, I thought it was far too hard, but then I realized that you can walk into a wall to skip your turn (maybe you should add a key for that?) - that was revelation #1.

After that, hunger became the only real danger, as healing items are plentiful and the majority of enemies are harmless. Now I'd get to around floor 20, die of starvation, and then a ghoul, giant skeleton or ghost would finish me off. At this point, I was thinking the whole skeleton-vs-living mechanic was a bit pointless, as once you got far enough to start encountering ghouls and giant skeletons, it became impossible to survive long in the skeleton form. I was ready to suggest you get rid of the health system - maybe have 2HP is alive, 1HP is skeleton, 0HP is ghost, and each form has special abilities and vulnerabilities, and there are more opportunities to swap between them so there's a puzzle element to it, or something like that...

And then I played again, but thought I'd try "cheating" a bit. Instead of drinking the purple potion right away, I went as far as I safely could with the skeleton (5 or 6 floors, until ghouls started showing up), taking advantage of the fact that it doesn't need food, and completely clearing out the levels of all enemies and gold. Then I went back to the starting screen, drank the potion, and started over but with a few thousand gold in the bank to spend on food. This time, I got to floor 43 before starving to death, and again being finished off by a ghoul.

And then I suddenly realized how I was *supposed* to be playing the game. I'd always figured  that once you're reduced to skeleton form, it's basically game over, since you won't be able to advance much further before a ghoul or giant skeleton finishes you off. However, I'd completely missed the fact that you can go back to previously visited floors, thoroughly clear them out, picking up all the gold which you skipped on the first run through in order to save food (which is no longer an issue in skeleton form), and then go back to one of the shops and use your new found riches to buy a purple potion.

Of course, if you die again, you'll have to go further back to get another purple potion, and it will use more food to get back to where you were, so it could easily spiral - but as long as you keep making enough progress between deaths, it should be a viable strategy.

Glad you enjoyed it!

Adding a key to skip turns is interesting, but there are a couple things that make me hesitant:

1. The current "skip" requires an environmental component, like a wall or candle/altar. I think it's interesting that your position matters. That said, I could also see it being too tedious. (It's tough to reason about when you've played the game for too long, heh.)

2. I wanted to keep the controls simple and have all interactions be based upon moving and bumping into stuff.

It's cool that you were able to make it so deep into the game! Floor 43 is pretty far, but it sounds like you made it ever farther after you changed your strategy a bit. What's the farthest you've been?

Funnily, the persistent floors weren't something that I had originally planned, but they do interact well with the skeleton's unbounded exploration.

Thanks for taking the time to check out the game and post your thoughts, much appreciated!

That's fair enough about the turn skipping. Right now, I don't think the need to be near a wall makes any real difference, but perhaps if you decide to add new content, then it might do in the future.  I would also say that the "push back" attacks of the zombie and giant-skeleton don't add anything much to the gameplay.

There's also a minor graphical glitch, as you can see here: 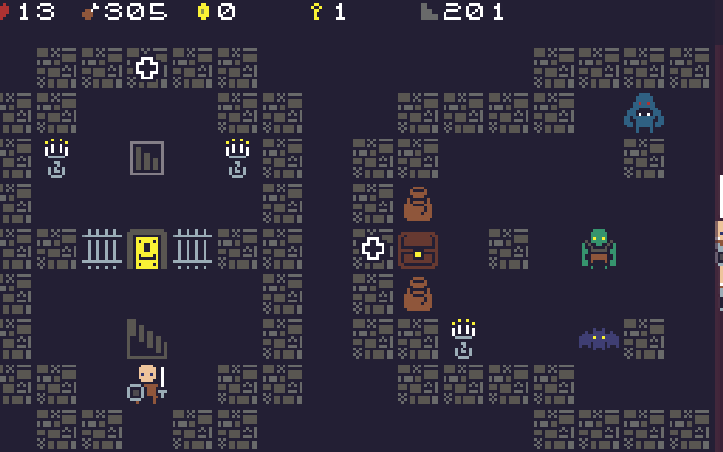 Note that most of the screen seems to be shifted left a bit, so some content on the left is cut off, and some stuff is visible at the right edge that probably shouldn't be. I get this every time I play. Possibly due to the way the screen in scaled?

I've just gone beyond level 200 without a game-over (only stopped due to boredom), but to be honest, I'm  pretty certain it's possible to continue indefinitely. I did get reduced to skeleton form once or twice early on (due to starvation), and had to backtrack a bit to get money and a purple potion, but for the last hundred levels or so I've not been anywhere close to death.

Once I realised that ghosts don't attack you, and are actually very helpful (good for killing ghouls and giant-skeletons), that made the game a *lot* easier (same with fire).  That's what I like most about this game - there's a real sense of discovery to the game mechanics.

Anyway, thanks again for the fun game! :) 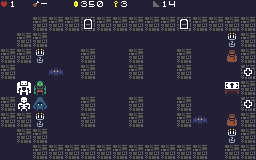 Here's what you do:

2. Avoid that situation next time

This is super cool!  Nice art, clever mechanics, chunky and satisfying to play.

I like the way the game isn't over after you die.  I seem to remember another roguelike doing that back in the day... is this a lizardlike?

This is 100% a lizardlike! At some early point (well before reality set in and I had to scope down), I planned to have an end boss who, once defeated, cursed you to live as a human/lizard hybrid... 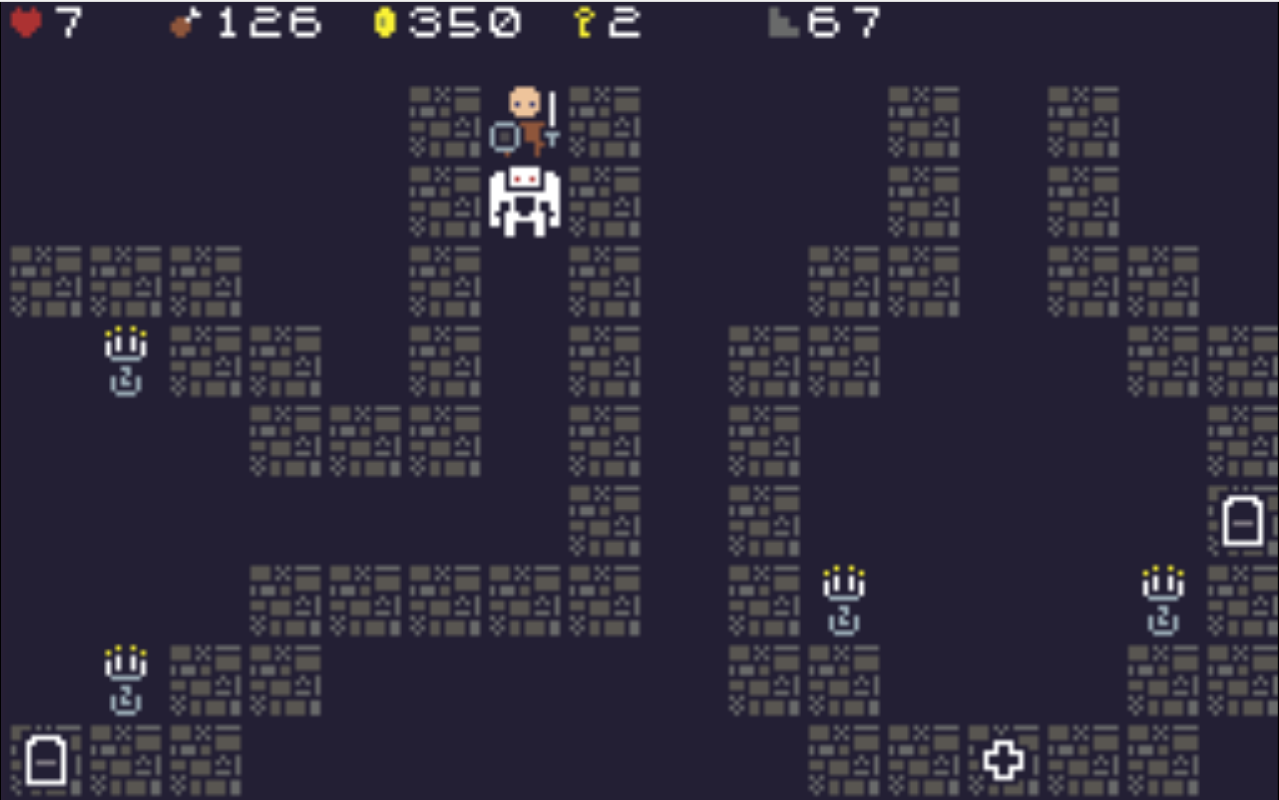 Very nice game! Small but very well polished and entertaining. I like the small puzzles and decisions presented by the locked doors and trapped treasure rooms.

A neat trick is that you can walk into wall to skip a turn, letting the monsters come to you. Unfortunately, the game got stuck when a golem tried to knock me back to another screen - as pictured above.

BTW, is there an end to the dungeon? I eventually started to just run to the downstairs as fast as possible, trying to get to the bottom. :)

Thanks! I tried to focus on "small, but done" in the spirit of the challenge.

The knockback into another room is an interesting case; I guess I never encountered/tested that.

There is currently no end. It's "arcade"-style where you play endlessly for a personal best. (That said, the game might not be balanced well enough where stays interesting at deeper levels.)

It would be great if the difficulty scaled a bit faster. I had some trouble with food around floor 20, but then I learned to guess the placement of the stairs and stopped exploring the whole floors. I managed to get just enough drops that I could more or less just run through the floors from stairs to stairs. It would be nice if the (very nicely done) treasure rooms had some more stuff than extra gold or food. If there was a scaled equipment, I wouldn't be able to ignore exploration without getting slaughtered a few floors down.

Obviously, several extra end-game enemies or a final boss would be sweet. :)

Agreed about some item progression providing a nice incentive to explore. (The procedural generation is a bit too simplistic as well, since you can guess or know the possible layout if you've played enough)

More monsters/boss would also be cool.

I can't take much credit for the graphics as the sprites are from Kenney's 1-bit Pack and recolored using the DawnBringer 32 palette. Kudos to them for making cool stuff and putting it out there for use!

Floor 10 has to be some record. I'm clearly the catacombs champ! But my secret is that the skelly is OP, as he can get hearts and doesn't need food! 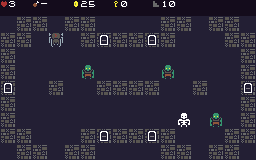 Nice! Here's another secret: I left in some debugging items to the left of the starting screen. :)

Wizard fucked me up -- can't wait to die by more stuff as the game progresses!